by admin
in National, News, Politics
0

As the date for the 2023 general elections in Nigeria draws closer, especially the much anticipated Presidential election, a lot of politicking and other interesting political activities, directly or indirectly associated with the said election has equally intensified.

Supporters and candidates of the various political parties in the country have equally continued to play their own part efficiently, especially most especially members of the three leading political parties in Nigeria, the likes of the Labour Party (LP), the main opposition party, the People’s Democratic Party (PDP) and the ruling party, All Progressives Congress (APC). Meanwhile, the latest is coming from a certain supporter of the Labour Party, identified as Dr. Eugene N. Nwosu, which has expectedly stirred up yet another talking point, especially across social media platforms.

This follows his resolve to go against his Church doctrine and faith just to ensure that he completes his support for the Labour Party Presidential candidate, Mr Peter Obi, by casting his vote on the day of election. Yes, this might sound strange to some persons. Well, according to Dr. Eugene, who is a member of the Jehovah Witness denomination, he revealed that his Church doctrine and their faith forbids members from voting or participating in any political election.

But for the sake of his preferred 2023 Presidential candidate, Mr Peter Obi, that he has made up his mind to violate that doctrine by going to cast his vote on the day of the Presidential election. Going further, he also revealed that it is not just about himself, that even his eligible family members are going to vote on the day of the said election. 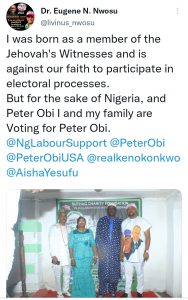 On the other hand, we have equally witnessed movement of both party members and politicians from one political party to the other, across different parts of the country. While some of the movement/defections are done behind closed doors, some others are done publicly with lots of fanfare, often on campaign grounds.

Though there are over twenty (20)  Presidential candidates jostling to occupy the number one position in the country come 29, 2023, when President Muhammadu Buhari will be stepping down.