Nigerian Lady Offers Her Kidney to Save The Life of Ike Ekweremadu’s Daughter, Sonia Ekweremadu

A certain Nigerian Lady and Facebook user identified as Annastasia Michael has responded to the public outcry made by the ailing Senator Ike Ekweremadu’s daughter, Sonia Ekweremadu. Recall that Sonia Ekweremadu took to her official Instagram page yesterday, September 12, 2022, to solicit for a voluntary good Samaritan who will donate a kidney to her.

The post stirred up a serious public sympathy, especially among Nigerians across social media platforms, and one person has demonstrated to be filled with the spirit of the Biblical good Samaritan, by offering to fill in the gap (in other words, she is willing to offer one of her kidneys) to save the life of Sonia Ekweremadu. 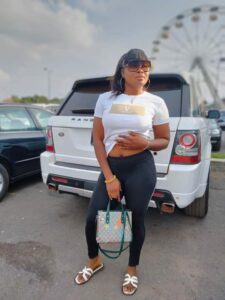 She equally made it clear that she’s doing this as a gesture anchored on “women helping women”, and also revealed that she doesn’t take alcoholic drinks, as such, guarantees that her kidney must be in a healthy condition. She also revealed that she has reached out to Sonia Ekweremadu and currently expecting a response from her. 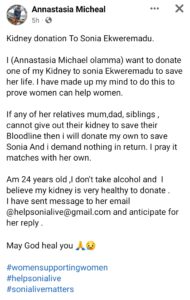 Recall that Sonia’s parents were recently arrested and detained in the United Kingdom, over the allegation of organ harvesting involved a certain Nigerian boy, which has further compounded issues for Sonia Ekweremadu as the planned kidney transplant has not been able to be carried as planned by the Ekweremadu’s family.

Meanwhile, there are laws guiding the donation of kidney to a needing patient, which must be devoid of any form of coercion, monetary gratification, etc.

What Your Conscience Must Understand About Sonia Ekweremadu's Current Health Predicament