Rising social media sensation, Annastasia Michael Olamma has cried out over the problem she’s having with her family following her decision to donate one of her kidneys to Senator Ike Ekweremadu’s daughter, Sonia, who is in dire need of a kidney transplant to stay alive.

Recall that Sonia Ekweremadu took to her Instagram page few days ago, to Publicly solicit for kidney donation from good spirited individuals. Following the post, Annastasia Michael accepted to be of help to Sonia. She equally made a post on her Facebook platforms, declaring her willingness to part with one of her kidneys for the sake of helping Sonia stay alive, which she termed “women helping women”. 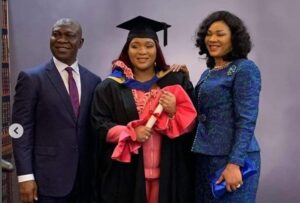 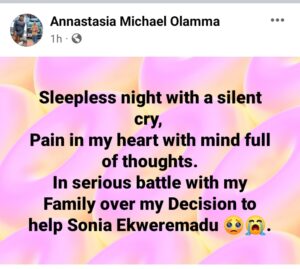 Meanwhile, when she made the post yesterday, indicating her willingness to help Sonia with one of her kidneys, a lot of people who commented on the post asked her if she discussed such a serious matter with her immediate family. And now, same seems to have reared up its ugly head as expected, as such, her family has refused to give consent to such.

On the other hand, she was the same lady who declared her interest to become the wife of Nollywood actor, Kenneth Aguba, following his rehabilitation by Apostle Chibuzor Gift Chinyere of Omega Power Ministry, OPM.