Once again, Yul Edochie has demonstrated that the love he has for his first wife, May Yul Edochie is still intact regardless of all the unpleasant and unsavory drama surrounding their marriage, which followed the actor’s decision to take a second wife, in the person of actress Judy Austin.

The Nollywood actor took to his social media platforms to lavish beautiful and sweet words on May on her birthday today.  Recall that the actor has consistently come under severe and harsh criticism from a lot of Nigerians across various social media platforms, for taking a second wife, more especially against the consent of May, who allegedly has been with the handsome actor from days of his little beginning. 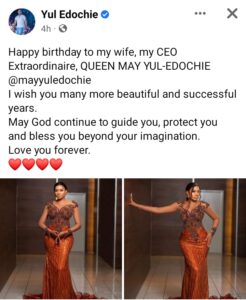 Even Yul Edochie’s elder brother, who is equally a popular Nollywood actor, Linc Edochie joined his brother in celebrating May Yul Edochie’s birthday, which also reaffirms the fact that her place in their family has not been compromised, and that she’s still loved as ever by members of the Edochie family. 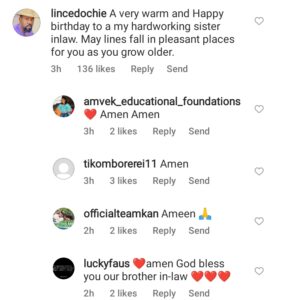 On the other hand, in as much as people are not happy with Yul Edochie’s decision to marry a second wife, it is very important that people should allow the couple sort out their differences behind close door and amicably. Yes, because most of the comments made by people over this very matter has not helped matter in anyway, as it has obviously continued to fuel more division and animosity between the couple.