There seems to be yet another good news coming the way of Senator Ike Ekweremadu’s daughter, Sonia Ekweremadu, following the decision of a certain Nigerian journalist and farmer, John Femi Adi, to donate one of his kidneys to save her life. This he made known via his official Facebook page few hours, precisely in the early hours of today, September 16, 2022.

Recall that Sonia Ekweremadu took to her Instagram page few days ago to beg the public for kidney to enable her undergo a transplant as soon as possible. This consequently followed the arrest and detention of her father and mother in the United Kingdom over allegation of organ harvesting. Though her mother, Beatrice Ekweremadu has since been granted bail. 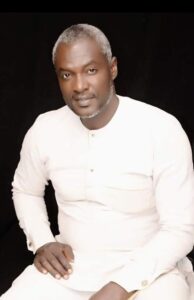 According to the Kaduna based journalist who took it upon himself to play the role of the Biblical good Samaritan, he’s doing this for the sake of God, and probably not for any hidden motive, most especially monetary gains. Equally, this is the second person coming out to declare intention to donate one of their kidneys to Sonia, as few days ago, a young Nigerian lady identified as Annastasia Michael Olamma equally can out to offer to donate one of her kidneys to Sonia Ekweremadu. 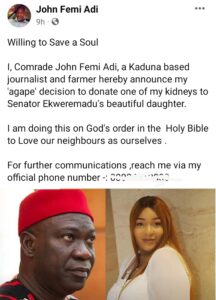 On the other hand, Sonia Ekweremadu in the social media post made few days ago, revealed that there’s an existing health condition in her family that makes it impossible for any member of her family to donate one of their kidneys to her.