Nollywood actress, Judy Austin has once again surprised people with her latest gesture of joining thousands of others, including Yul Edochie, to celebrate May Yul Edochie on her birthday today, September 16, 2022.

Judy Austin who has being in the centre of the drama rocking the marriage of Yul Edochie and his first wife, May Yul Edochie, decided to surprise everyone when she took to her official Instagram page few hours ago to mark May Yul Edochie’s birthday. Some of the comments queried Judy Austin for not tagging May Yul Edochie on the post, while some others are of the opinion that Judy cannot summon the courage and boldness to put a call through to May, of which I think all that are not necessary as it is not helping the matter in any way. 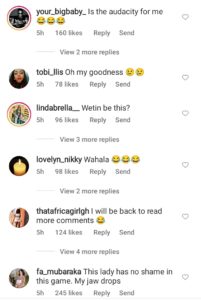 On the other hand, I think people are equally making the situation worse for all the parties involved in this unending drama. For the interest of peace, people should slow down with the way they meddle in this matter, and equally allow them handle this matter in the best way that suits them, rather than fueling the crisis with their unpleasant and unsavory utterances, thinking they are doing May Yul Edochie any good.