by admin
in Entertainment, News, Opinion
0

The social media drama/rift involving Nigerian music stars, Davido and Dammy Krane seems to have gone beyond mere exchange of words of mere accusations between both camps, and has obviously taken an unsavory dimension. Firstly, recall that Dammy Krane few days ago had accused Davido of refusing to pay him following a musical project in the past.

Meanwhile, in reaction to the claims made by Dammy Krane over the unsettled transaction, Davido’s personal logistics manager, Isreal DMW has come out to deny the allegation that his boss is owing Dammy Krane. He went further to state that Davido spent thousands of dollars to ensure that Dammy Krane was set free following his credit card case in the United States sometime ago. 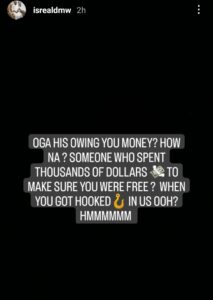 Unfortunately, this is the angle most people never wanted to witness in the entire drama, that will result into name calling, shaming and the over all washing of dirty linens in the public, but sadly, it has gradually began to walk that ugly lane. This issue could have been better handled than what we have seen from both camps, yes, as they could have explored more responsible, matured and peaceful alternative to what we have seen so far.

Now, more dirty stuffs have continued to find it way into the public space, just like what Dammy Krane posted below, claiming that he was the one who paid for the video of one of Davido’s tracks back then, on the ground that the former couldn’t afford the bills then, which followed a comment by one of Davido’s boys.

The question is, of what solution will all these dirty fighting on social media offer to the problem in question? Yes, it is true that celebrities and entertainers thrive mostly in controversies, especially as a way of keeping their careers afloat, but this is not the sort of controversies palatable for public consumption. This is so because, such are the sort of beef in the industry that breeds certain ungodly acts and permanently fractured relationship and friendship. 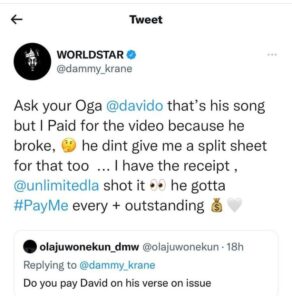 Instead of both camps engaging in this dirty social media war of words, especially when it’s obvious that loyalists to Davido and Dammy Krane will hardly stay on the fence to watch and observe, as they will definitely engage in the fight, defending their various camps and interests, it will be a far more profitable alternative for them to rather opt for the mediation role. Yes, this will definitely produce the best of results and in a quicker time, rather than the path both have decided to toe.

I understand the fact that pride and ego must play it’s inevitable roles in the entire scenario, but wisdom will sure inform you that peace can only be achieved on the round table than through any other means. There’s hardly a way this matter can ever be resolved on the social media table, it must always end on the round table if truly peace is an option on their wish list. 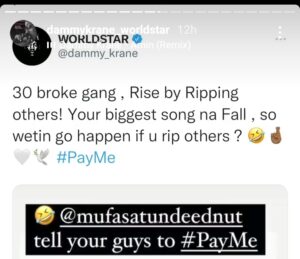 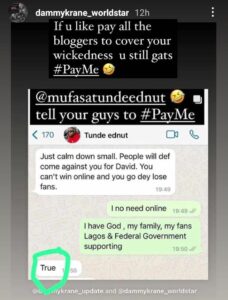 One of the biggest setbacks to peace and unity is pride and ego, and once these two factors are defeated in any situation, then peace always returns almost immediately. And I urge third parties in this rift to stop adding more fuel to the flame with their utterances, but rather sue for peace through their various positions.

Some of the things I read in their posts is not worthy of making it to the public space, and it may likely come back to hurt each camp afterwards, hence the need why this matter should be resolved at this stage before it gets worse.

Suicide of Wealthy Laolu Martins: What Does Mankind Really want After all?