How a British citizen Was Allegedly Poisoned in Uganda, Died After Airlifted to UK for Urgent Medical Attention

by admin
in Health, National, News
0

Death there say is an inevitable end for all, but regardless of that, it is always a sad and heartbreaking experience when we loss our dear ones, especially when we put into consideration the circumstances leading up to the unfortunate incident.

Meanwhile, this seems to be the case of a certain British citizen identified as Kigozi Michael, otherwise known as Mike Kigozi, who recently passed on after a brief illness. According to one of the deceased friends, Caroline Kawooya, Mike who in the course of his death was on a trip to Uganda (his motherland), where he was allegedly must have been poisoned by an unidentified person. 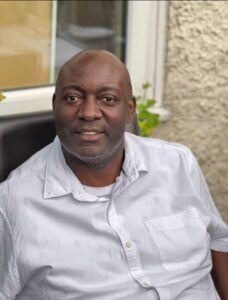 The heartbroken Caroline equally lamented the fact that this is the same reason progress and development has continued to elude the continent, simply because people from that part of the world have allegedly continued to go after the lives of some of their best brains, especially those in the diaspora. Possibly as a result of envy and jealousy, and this according to her, has continued to scare many of them away from visiting their mother lands.

Further revealed is the fact that the deceased was sent a private jet to airlift him to England, to enable him receive urgent and proper medical attention, but was so unfortunate to have died in the process. On the other hand, investigations into the circumstances surrounding his death has reportedly been launched by same source. Meanwhile, some of the friends of the deceased have since taken to their various social media platforms to mourn his death. 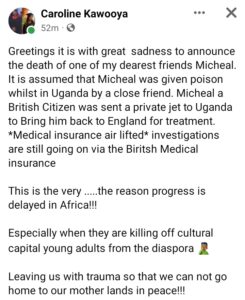 In as much as this incident has not been officially proven to be so, but this has become the fate of most successful persons in the continent, and as such, has continued to seriously scare most of them away from visiting homes. Some of them could send many years, up to even 10 years and above, without visiting their mother lands within same period, simply because they are too scared of what may become of their lives afterwards. 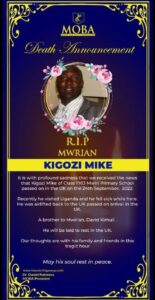 This might sound harsh anyway, but we cannot continue running away from the truth, no matter how bitter it is. Most of us read a lot of this in the news, of which we know about some of our best brains whom have died in such unfortunate circumstances during their visits, including those who find themselves in the kidnappers den. And while some are lucky to live to tell their story, some others aren’t as they either must have died in the process or otherwise.