Media personality, Sally Suleiman has played down the idea of planning a “talk of town” wedding with the budget of ten million Naira (10,000,000). According to her, in today’s world, that amount of money cannot give anyone a big wedding, describing such budget as meant for those in the middle class. 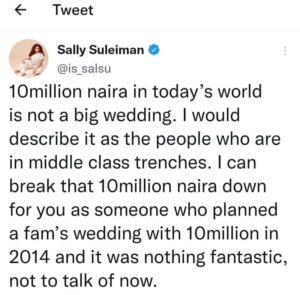 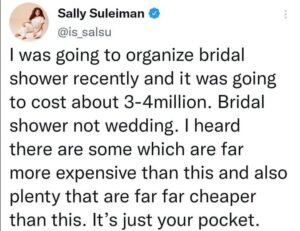 Good a thing she ended up stating that all of these depends on what you can afford. Because it would have been highly misleading to end the post without that clause. Yes, because there’s no globally accepted formula or standard for having a successful wedding ceremony, and none has equally been accepted by any criteria as the most successful or fantastic wedding. In other words, people can plan their weddings according to their pockets and still end up with a highly successful and memorable wedding ceremony, and a beautiful home.

Besides, in recent times, we have equally been obliged with the fact and reality that the amount spent on a wedding ceremony does not in anyway determine the success of the marriage. In fact, going by recent happenings, we have seen lots of big budgets wedding ceremonies crash almost immediately, like an ill-fated flight.

Therefore, I advise people to avoid subjecting themselves to unnecessary pressure and headache as a result of social media opinions. Most of these people are either “yet to go into marriage or have not had a successful marriage”. So, do your thing according to your capacity and live happily ever after, because nature of wedding is not a determining factor in having a lovely and beautiful home.