by admin
in Entertainment, Lifestyle, Uncategorized
0

Popular Nollywood actress and producer, Judy Austin has come out to brag about her great beauty. In a post via her Instagram page, the beautiful actress who is equally a second wife to her male colleague, Yul Edochie, made it clear that she is too beautiful for this world.

Going further, she asserted that even her alleged haters have actually come to terms with that fact. Meanwhile, the post has expected continued to generate mixed reactions from people, especially those who are yet to forgive her for marrying Yul Edochie, even when she’s allegedly aware that Yul is happily married to his first wife, May Yul Edochie. 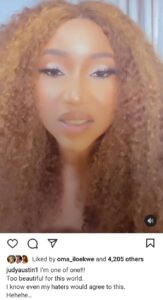 On the other hand, this is not the first time she has been seen making such controversial posts via her personal social media platforms. Recall that recently, she joined other people in marking the birthday of Yul Edochie’s first wife, May Yul Edochie, which many Nigerians viewed as an affront on his co wife, and equally used the opportunity to criticize her action.

Meanwhile, the sultry and talented actress has been on different movie sets with Yul Edochie in recent times, which has equally received series of back lashing online. Though some people have equally defended her, stating that duo cannot stop working together with regards to their relationship.