The sweet and enviable romance tales between Nigerian music star, David Adeleke, popularly known as Davido and Chioma Rowland, otherwise known as Chef Chi, remains one of the most talked and envied publicly known love affairs. Unfortunately, things allegedly went sour following alleged infidelity on one side of the divides, hence prompting a lot of people to come hard on the music star, for supposedly subjecting Chioma to such emotional condition.

Well, following the recent photos shared by Davido’s personal logistics manager, Isreal DMW, of Chioma and Davido hanging out together, it has once again changed the narrative and mindset of most people, especially Nigerians. Yeah, most of these online relationship experts are always known to hastily jump into relationship issues without getting the real facts in their assumed amateur career. 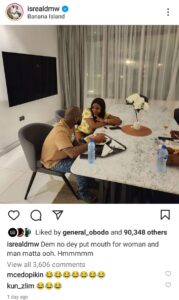 Well, I have read a lot of comments online since the said photos surfaced online, with many people openly regretting their comments and reactions during the peak of the alleged fallout between the lovebirds. Unfortunately, it will still not have taught a lot of people the necessary lessons of learning to mind their business.

We have equally witnessed same in that of Nollywood actor, Yul Edochie and his first wife, May Yul Edochie. Good a thing the duo were pictured recently during the birthday celebration of May and her foundation outreach to the less privileged.

It is very important that people must learn to avoid asserting excessive and irritating opinions in matters of family/relationship affairs, especially when they are not directly involved in the matter. Even in the caption of the post made by Israel DMW, he advised people to equally stop diving into relationship/marriage matters. Even, some of the inflammatory comments made by people at doesn’t help in anyway, as it will rather make matter worse. So, people should/must learn to allow people sort out their differences in their own way.

Revealed: Here's the Bitter Truth About The 53rd Marriage Anniversary of Chief Pete Edochie and Wife