Popular Nollywood actress, Amarachi Igidimbah has welcomed a new baby with her hubby. The actress took to her official Instagram account few hours ago to share maternity photos while announcing the birth of her baby boy.

The actress nicknamed “Pino Pino” who hails from Imo State tied the knot with her rich hubby late in 2021, and now their union is blessed with yet another precious gift. According to her, the name of her new baby is “King Chimeremze Asher Nzekwe”. 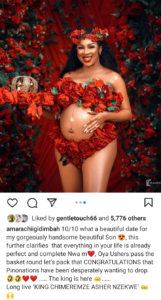 Meanwhile, lots of her colleagues in Nollywood have taken to various social media platforms to share photos of the actress as they join in celebrating the birth of Amarachi’s first child from her marriage. Some of her colleagues and friends who have sent their congratulatory messages include actress Destiny Etiko, Rechael Okonkwo, Chizzy Alichi, Stan Nze, Adinma Somadina, Chacha Eke Faani, and many others. 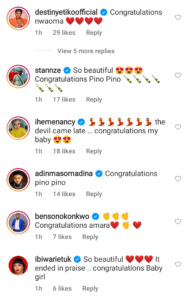 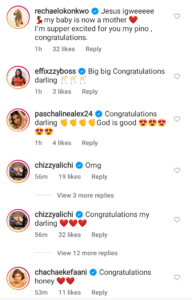 Meanwhile, the actress is yet to share photos of her new baby, which has become a new trend with most celebrities to withhold the face of their baby at first. Only to be released on a later date as part of another stage in the pregnancy/birth circle.