Nigerian singer, Habeeb Okikiola, popularly known as Portable Zazu has gotten new tattoos on his face, and it has continued to generate mixed reactions from people. Unfortunately, most of those who have reacted to the action of the controversial singer have expressed displeasure with his decision to get new tattoos on his face.

But this is one of the most unreasonable thing that people should indulge into, especially when you try to dictate how people should live their private lives. Yes, regardless of the fact that Portable is a celebrity and as such, that people will definitely wade into his private affairs, especially when it makes it way to the public space. Yet, that will still not justify the kind of criticism some of these celebrities get because of their personal lifestyles, especially with regards to Portable’s new tattoos. 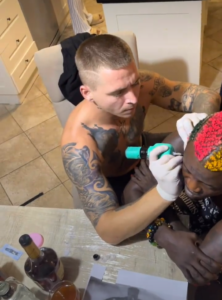 Is it not time that people learn to identify with their boundaries when it comes to what happens in people’s lives? This young man have not committed any known crime for deciding to get new tattoos, regardless in whatever part of his body he chooses to effect such.

For Christ sake, this is his life, and as such, has done nothing wrong by getting new tattoos, especially when it’s obvious he has not infringed on anyone’s peace or lifestyle. Rather, he’s only walking the path that makes him happy and equally indulging in all of these with his own money. 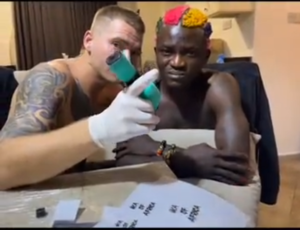 So, you wonder why the level on onslaught on him for doing what makes him happy.

Portable might have been synonymous with controversies over time, especially since he emerged as a big name in the Nigerian music industry, that still doesn’t validate the latest onslaught on the Zazu crooner for only doing what makes him happy, without wronging anyone in the process. 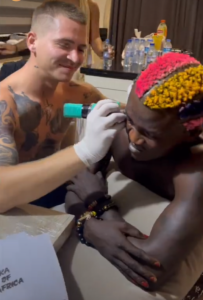 But it is so unfortunate that most people on social media, especially from this part of the world, have made it a habit to always be the judge in people’s lives, forcefully trying to dictate to people how best to run their private affairs, including how they must spend their money; who to spend it on, what to spend it on and when to do it as well.

Well, I think it is time we learn to mind our business and allow people to live their lives in peace, as long as it doesn’t pose any form of infringement on ours. Yes, because it is increasingly becoming irritating seeing how we are quick to attack others based on the lifestyle they choose to go with.