by admin
in National, News, Politics
0

In recent weeks, there have been series of reports on alleged attacks on members of the Labour Party in some parts of the country. Unfortunately, the ugly incident seems to be on the increase with the recent attack on one Mr. Joshua Alamu in Nasarawa State, during the party’s sensitization exercise.

The incident was brought to the public space by one Jamilu Sufi in a post via his Twitter account. In the said post, he shared a photo of the victim while he received treatment, and went further to urge the Nigerian Police authority to bring the perpetrators to book, and equally ensure protection of the Nigerian people. 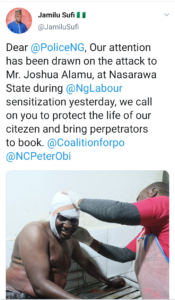 Meanwhile, the Presidential candidate of the party, Mr. Peter Obi had previously reacted to similar incidents, during which he called on the security agencies to ensure that members and supporters of the various political parties in the country are guaranteed of their safety while exercising their civic and constitutional rights. 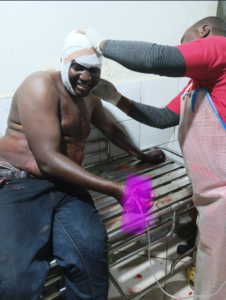 And following the latest incident, Peter Obi has once again stressed that the security agencies should ensure that the political space is open for all to exercise their constitutional rights, especially rights to peaceful assembly, regardless of political party affiliations. He further made it clear that any form of physical attacks on law abiding citizens who are only exercising the aforementioned rights is totally unacceptable. 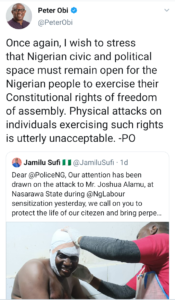 On the other hand, this remains one of the experience we must try to avoid as the country head into the 2023 general elections, especially the Presidential election. The political space must not be characterized with undemocratic and lawless attributes and activities, such that is capable of truncating the peace and unity of the country in anyway.

The security agencies must equally rise up to the occasion by doubling their efforts in the face of all these ugly incidents, ensuring that law abiding Nigerians enjoy adequate peace and security in the course of staging peaceful and lawful assembly in support of their various political parties.

Revealed: How Actress Destiny Etiko Got The Venza She Gave her Mum as Birthday Gift