Tidinz: His Family and Management Finally Reveals The Cause of His Death & Not Drug Overdose

The family and management of late Nigerian Rapper, Richard Dilichukwu Okonkwo, otherwise known as Tidinz has finally come out to acknowledge the death of the music star, whose death had remained unclear for days now.

They equally frowned at the various media reports that had earlier suggested that Tidinz had died of alleged drug overdose. According to them, the deceased had a health condition as a result of depression and stress, and that his death has nothing to do with drug.

Going further, they revealed that the singer was rushed to the hospital as they battled to save his life, but unfortunately, he died at the hospital in the arms of his father on Sunday, October 9, 2022. 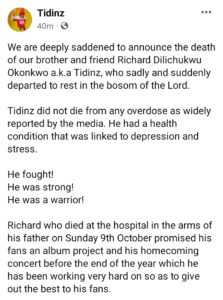 The post equally made it known that Tidinz who had promised his fans an album before the year runs out, was working seriously to keep to his words. Unfortunately, the talented musician couldn’t stay alive to ensure the completion of the project which is already in progress. Though it is yet unknown if his management will continue with the album project. 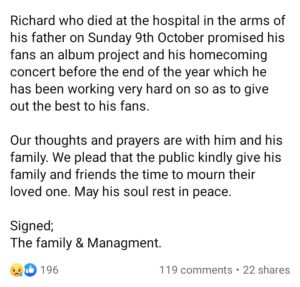 The death of the singer had earlier been greeted with mixed reactions and controversies, with conflicting reports as well. While some strongly argued that Tidinz is still very much alive, and was allegedly spotted at certain unnamed places, some others maintained that he has departed the world. But such rumours can now be put to permanent rest following the release of an official statement from his family and management. 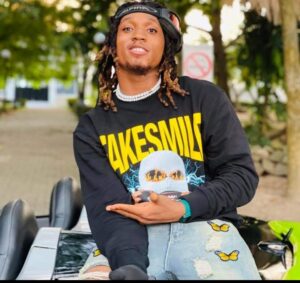 Tidinz who until his unfortunate demise remains one of the big names in the music industry within the South Eastern region of the country. He has a couple of hit tracks to his name including AkpaAza, Sapa, A’Biggie and many others. He has equally worked with several big names in the industry like Phyno, Jeriq, Zoro, Young6ix, and others.

May his soul continue to rest in peace, and we equally pray for God almighty to grant the family, friends, colleagues and others the fortitude to bear the irreparable loss.

National Awards: Why Teni Did No Wrong During Her Encounter With President Buhari