A young Nigerian lady identified as Fauzziyah Ebunoluwa has stirred up controversy on Twitter following her recent post, in which she delved into one of the most controversial factor in relationships.

The issue of who provides certain basic needs in a relationship, things like food, shelter, accommodation, transport money, recharge cards, data, etc, has remained one of the most controversial and inconclusive discussions in recent years. While some people have continued to argue that the aforementioned is the sole responsibility of the man in a relationship, some others are of the opinion that it should be the responsibility of the duo. 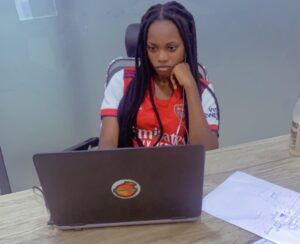 According to Fauzziyah, she warned that people should stop getting into relationships with people who cannot provide for themselves such basic needs like transport fare, food, data, clothes, etc. Going further, she made it clear that her opinion is not gender biased as it is applicable to both genders, as they are leeches in both men and women when it comes to relationship. 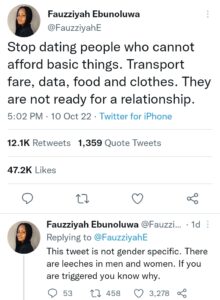 The post has continued to generate mixed reactions from people, with some concurring with her point, while some others have insisted that who is most capable, financially, in the relationship should be of help to the other regards to the aforementioned.

Though to a great extent, some argued that while it is good that the two people in a relationship are financially independent, at least, to provide some of their personal basic needs, that it is the duty of the male to handle some of the things she mentioned.

Meanwhile, it is most common in this part of the world for the man to bear the burden of most of the basic needs in a relationship, and has remained one of the major yardsticks in rating who’s a capable man. In fact, a lot of relationships/marriages have actually packed up as a result of the inability of the male gender to provide these things at the time there are needed.

While she has a valid point, it is equally important to note that there’s no globally accepted formula for that perfect relationship, as such, people are at liberty to run their relationship in the way that best suits them.

National Honours: How Nigerian Artists Are Being Maltreated And Marginalized By Government