Sad: Five Children In 19 Years of Abusive Marriage, What Was Bimbo Thinking?

Love they say is blind, and that could possibly be what played out in the case of late Bimbo and her car dealer hubby, Ikechukwu Ogbonna, better known as IVD. Else how do you explain a situation were a woman has to endure through an abusive marriage for a whole 19 years, and equally had as much as five kids with same man? How do you really explain this kind of thing other than call it “love is blind”.

Well, according to the most recent incident in their marriage, Bimbo was reportedly rushed to the hospital within this week after yet another brutal confrontation with her husband. According to LIB, the confrontation resulted in their house being set ablaze and with the duo sustaining varying degrees of burns and injuries. Sadly, Bimbo’s was so severe that she had to be rushed to the Intensive Care Unit, ICU, of a certain hospital in Lagos State were she was admitted after the incident, were she reportedly died afterwards.

Mixed reactions have continued to trail the ugly incident, with many blaming her for refusing to leave while still alive, but rather choose to stay in an abusive marriage for 19 whole years. How on earth was she able to continue living under the same roof with a hubby that constantly subjects her to all these unending life threatening treatments and even having as much as five kids with him? Wow! And now she has eventually paid with her dear life. 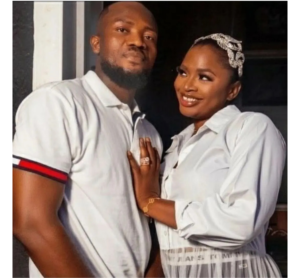 In as much as we know that marriage is for better for worse, I strongly disassociate myself from this kind of “for better for worse” marriage; one that subjects my life to endless dangers is not acceptable and unpardonable in anyway. What was her motivation and believe? That the same daredevil creature will change and become a better husband tomorrow? This should stand as the most prominent self deceit ever known to the world, yes!

Meanwhile, same report had it that sometime in May 2019, that same man had unleashed his beast on her while she was allegedly 8 months pregnant. She was said to have been plunged into coma following the ugly incident, but as God may have it, she eventually regained consciousness, and expectedly, she convinced herself once again that he will change for better before the break of another dawn. Unfortunately, the circle continues untill she paid the ultimate price with her precious life.

It is so disheartening that in today’s world, many people still find it so difficult reading the hand writing on the wall in such an abusive marriages/relationships. More like they have been hypnotized beyond redemption, until the devil strikes, and by then it is already too late for any remedy, just like in the case of Bimbo.

See, most women are just too easily deceived by the sugar coated tongues of most of these abusers of husbands, giving you endless fake hope of things changing for the better. Today they are begging for yesterday’s own, tomorrow they are equally on same route, year in year out, untill they finally reach the peak of their devilishness. Be wise enough to know when to press the exit button and never look back to regret your decision to quit. Yes, because defeating such monsters is as good as aiming to fight the lion with barehands, obviously a suicidal mission.

Walking out of that marriage with your life in tact is a million times better than “RIP” with a multi million dollars burial ceremony. Do not be cowed by what the society will say about you, think about your life first, which is the most paramount thing at every given point in time.

And finally, stay alive for your kids, for you will never have a control on the kind of treatments the incoming woman will subject your children to. The worse you may be able to do is to continue weeping from the grave!