Precious Chikwendu is obviously not happy with the reportage of certain media platforms with regards to the current state of things involving herself and her erstwhile hubby and father of her four sons, Femi Fani Kayode, popularly known as FFK. In a lengthy post via her social media platforms, the former Miss United Nations, UN, lashed out at those who derive joy in other’s unhappiness.

This follows the recent outing involving the duo, during which they attended the house party organized by Senator Sani Musa. And since photos from the outing surfaced online, a lot of people have continued to criticize her for getting back with FFK, and she’s not happy with the behavior of people over that, hence questioning why most people these days derive so much joy and happiness in negative news about others. 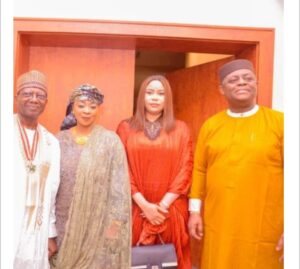 She went ahead to state that though she and FFK had issues in the past, but that they have left that scene long time ago, and have agreed to focus on their children, of which both of them are fully involved in taking decisions about their kids, which is part of the agreement arising from their reconciliation after a long excruciating legal and media tussles. 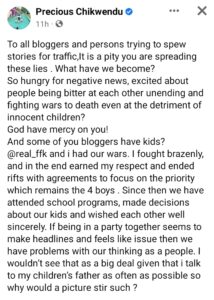 On the other hand, she revealed that though she and FFK are in good terms per the sake of their sons, but that they have continued to live separately. And as such, she has no influence whatsoever on how he (FFk) lives his life and neither does he have influence on how she lives her own life as well. 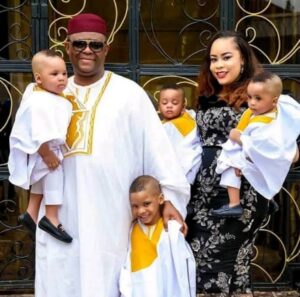 But she warned those making up negative stories about her relationship with FFK to desist from such, as most of these things are negatively affecting their innocent children in several ways. She equally stated that their children were denied the happiness that comes with co-parenting during the two years she and FFK were drawn into their highly publicized marital crisis, a situation she wouldn’t want her four sons to go through again.

As such, she pleaded with those who are in the constant habit of creating negative stories about happy family to desist from such. Precious didn’t mince words in reminding everyone that she owe it as a duty and obligation to her children to have a peaceful childhood, as such, that she will continue to honour their father in other to achieve that peace. 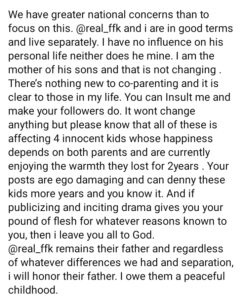 Recall that the duo who got married some time in 2015 fell apart along the line, and subsequently went through one of the most traumatic divorce experiences, which eventually culminated into a fierce legal battle, a situation she doesn’t want to go through again, especially for the sake of her children’s happiness and peace of mind.

Meanwhile, Chef Chioma is facing a similar fate currently, as she has been harshly criticized following her recent reunion with music star, Davido, after a long period of alleged breakup. And just like we had previously stated in one of our articles, people must learn to respect other’s decisions with regards to what makes them happy. Stop electing ourselves “unsolicited” Attorneys in people’s private lives, let’s learn to allow people live their lives in peace.