Popular Nollwood actress, Lizzy Gold Onuwaje was a year older yesterday, October 16, 2022, and from the looks of things, it was indeed an unforgettable birthday celebration for the Delta State born movie star. Aside the fact that many of her colleagues in Nollywood celebrated her across social media platforms, they equally were physically present at the grand celebration, last night in Asaba.

Some of the video clips released so far from the birthday party held in Asaba last night, shows that it was indeed a memorable night of celebration for Lizzy Gold. This was as her colleagues who turned up in their numbers for the celebration, equally ensured that she was swimming in lots of cash. Lizzy Gold Onuwaje was pictured in one of the birthday videos full of excitement as she plays with the huge sums of money gifted to her by friends and colleagues who came around for the birthday party. 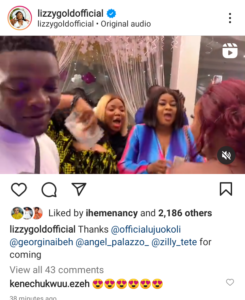 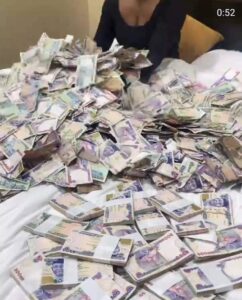 Some of the notable Nollwood personalities who were present at the birthday party include Yul Edochie, Harry B Anyanwu, Rex Nosa (Babarex), Destiny Etiko, Gina Kings, Kevin Uvo, Shaggy, Uju Okoli, Georgina Ibeh, and others. Though Zubby Michael was conspicuously missing out as he was not seen in any of the clips from the birthday party released so far. Meanwhile, it has become a trademark attributes of members of Nollywood to turn up in their numbers to support their colleagues at such times.

#Ballond'or: How Ronaldo Overshadowed Benzema And Other Real Madrid's Great Talents For Years