#Ballond’or: How Ronaldo Overshadowed Benzema And Other Real Madrid’s Great Talents For Years

by admin
in News, Opinion
0

Yesterday, October 17, 2022 was indeed a special and memorable day in the football career of Real Madrid and French striker, Karim Benzema, following his clinching of football’s most coveted individual award, the Ballon d’or. Though it was widely anticipated that the lethal striker will eventually go home with the award, following an impressive and outstanding performance in the 2021/2022 season.

Well, the aftermath of the event has indeed sparked off series of argument and debate, of which one of them is the question, “has Cristiano Ronaldo been overshadowing other Real Madrid’s great talents during his illustrious era at the Bernabeu?” 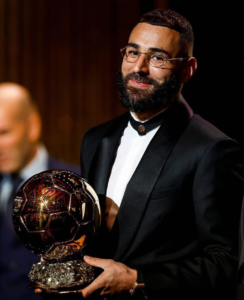 Meanwhile, since his departure from the club in 2018, two of Real’s players, Luka Modric and Karim Benzema have gone on to take home the Ballon d’or. A situation which was very unlikely during Ronaldo’s time at the club. Well, the truth remains that there will hardly be two captains in a ship, which best describes the situation involving Ronaldo and the subsequent Ballon d’or winners from the club.

Of truth is that, should it be that Ronaldo is still at Real Madrid, Modric and Benzema will likely not have won the award. Yes, because the team would have still been built around Ronaldo, and as such, the shines and glory of the team’s performance would “naturally” likely have continued to revolve around him. This in other words would not have put both Modric, Benzema or any other of their players both in the picture and position to have won the award, as such, if it was going to land at Real Madrid, then Ronaldo would have always stood the most favourite by a lot of feasible factors. 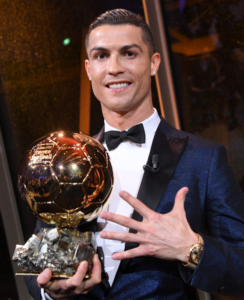 For instance, regardless of how good most of the other Real Madrid players were, persons like Sergio Ramos, Marcelo, Luka Modric, Toni Kroos, Iker Casilas, Karim Benzema, Angel Di’ Maria, Mesut Ozil, and others, it was still Ronaldo who enjoyed all the media attention the most.

Equally, it was not untill Ronaldo left the club that Benzema began to shone like a million stars, and his quality and performances equally being given adequate attention and appreciation, not just at Real Madrid but world over. But if Ronaldo was still there, it would definitely have been a very different story.

On the other hand, the unfortunate part of the conversation is the fact that, should it be that Ronaldo is still playing for Real, any year/season he fails the win the award it will most likely not even be won by the other Real Madrid players. Yes, because the other players are literally under his shadow, as such, making it a very difficult situation for any of them to out perform or out shine him as to place them ahead of the Portuguese hitman with regards to individual performance.

Therefore, it is not wrong to say that, should there have been a continued presence of Ronaldo at Real Madrid, it would have equally continued to be a huge barrier on the visibility of the great ability and performances of the other players in the team. As such, will inevitably take away the shine and attention from them, and easily rested on Ronaldo. But mind you, not necessarily out of Ronaldo’s own making, but because nature, destiny and other factors have decreed so.

God is in this story, that's all that matters- Actress Judy Austin Reveals