Nollywood film writer and art director, Darlington Chukwunyere has revealed all the heartbreaking events that played out in his life in recent months, that has made him learn in the hard way. The Nollywood filmmaker took to his personal Facebook page hours ago to make known his recent predicaments.

According to him, the past few months have been hellish for him, including the fact that he buried two of his relatives, lost his brother and that he had to spend several sleepless and traumatic nights at the hospital as his only sister battled to be alive. He further revealed that he was involved in a terrible accident sometime in July 2022, which made it impossible for him to walk with both legs, and that it was just recently that he miraculously regained his feet again. A miracle that made some people began to doubt if truly he was actually involved in any accident. 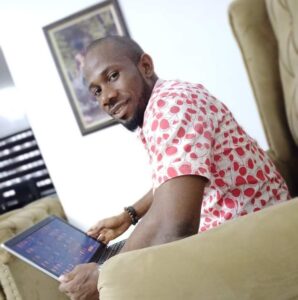 The downcast Darlington said that in all of these experiences, that he has come to understand that life is ‘truly vanity upon vanity’, owing to the fact that once death comes knocking on the door, nothing else matters in the world other than battling to be alive once again. 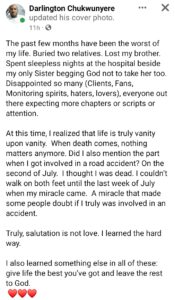 Darlington has been the brain behind some of your favourite Nollywood movies to include “Love me Mum”, “In Between Colours”, “Test of Love” and a host of others.