US based flamboyant Nigerian businessman identified as Francis Van-Lare has called out his fellow men who cannot conveniently afford five hundred thousand Naira (N500,000) whenever their woman asks for it.

Francis who has been in the news in recent times over his controversial divorce stories equally stated that you are not the man of the house once you are unable to give your woman the aforementioned amount of money when she’s in need of it, as the men are expectedly pillar of the house. 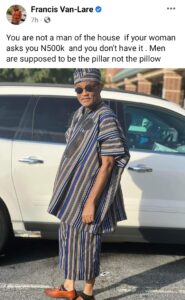 The post has equally sparked off mixed reactions from people, who obviously are shocked at such school of thought, most especially from an aging man like Francis Van-Lare. One of those who reacted to the post is Uche Obinna Henry, who asked the author of the post if he can afford the amount in question in his 30s if his wife demands for it.

In a swift reaction, Francis made it clear that he used to gift his girl friends more than that amount, in fact, that he used to pay their rents and equally travelled abroad with them as early as when he was just 22 years old. Going further, he also claimed that in 1975, he sent his girlfriend to a university in London, and that was at the age of 22 as well. 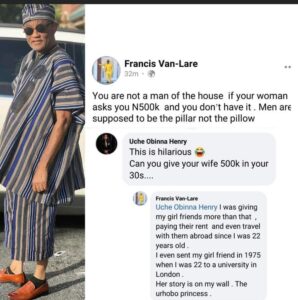 More people have continued to comment on the post, with majority of them unapologetically disagreeing with his school of thought, and equally schooling on the fact that people must live their lives according to their capacity and economic means. Therefore, that people shouldn’t be pressured into jumping a tall fence, unprepared.

Read more comments from people below… 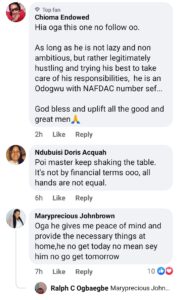 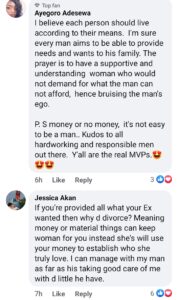 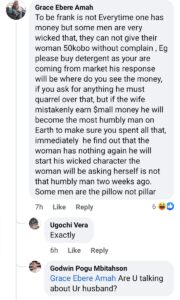 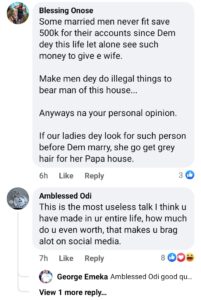 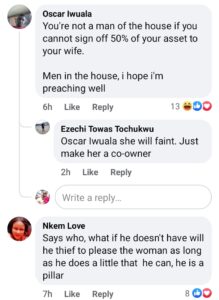 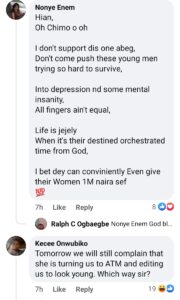 Recall that few days ago, Mr. Francis was back in the news with the story of his marriage and divorce experiences, as it was reported that he had been married and divorced five times. He claimed in one of his social media posts that one of his erstwhile wives had wanted him dead just because he refused to sign off 50% of his assets to her.

He equally advised those living abroad to stop marrying from home, alleging that they are only/more interested in relocating abroad than having a peaceful and successful marriage. Hence why they start misbehaving once they accomplish their mission of relocating abroad.