Marriage has never been anything close to being bed of roses and as such, many marriages have packed up following the failure of both parties to find solutions to the litany of crisis that besiege their union along the line. Meanwhile, a lot of others have equally been able to triumph regardless of all these daunting challenges, and that’s exactly the case with the marriage of veteran Nollywood actress, Uche Ebere.

The actress in a revelation made earlier today while reacting to a post on marital issues, made it known that she encountered a lot of discouraging and heartbreaking crisis in the early stage of her marriage. According to her, the first 5-10 years of her marriage wasn’t easy at all, and she likened the experience to hellish.

Going further, she revealed that she and her spouse used to quarrel a lot back then, to the extent they had threatened to quit the union on many occasions. 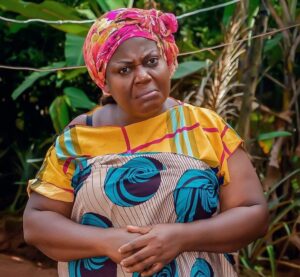 “We endured a lot from each other, tolerated a lot, but in all we still pray together, eat together, sleep on the same bed together, not minding our differences,” she added. She went on to thank God for the progress in her marriage today, as all of those ugly experiences are now in the past.

“I’m 30 years in marriage and we’re still waxing stronger. On God, I’m so grateful,” she concluded. 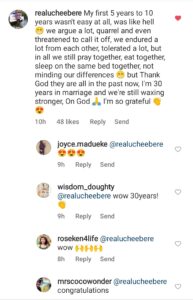 Unfortunately, a lot of marriages today have not been able to walk same path, but are quickly disbanded, even over inconsequential issues. But it is good that a person like actress Uche Ebere has come out to acknowledge the fact that no marriage is a bed of roses, but that it is with understanding, tolerance, forgiveness and perseverance that one can actually have a successful marriage.

On the other hand, a lot of young people today go into marriage without understanding some of these things, hence why they are not ready and willing to go through that path once it inevitably surfaces along the journey.

Why Comedian Josh2funny Can't Really Get Enough of his Beautiful Wife, Bina Alfred