Lady Narrates Her Horrific Experience in the Hands of a Taxi Driver in London.

by admin
in News, Travel, World
0

A Nigerian lady, simply identified as Sonia, who’s based in London, United Kingdom, has made a shocking revelation about her horrifying experience in the hands of a certain taxi driver, who she alleged had wanted to kidnap her during her trip.

According to her Twitter post, the said taxi driver who she said his name is Abdishakur and whose photos the raging Sonia equally shared, had along her trip, diverted from her initial destination to another location, which plunged her into anxiety and trauma. 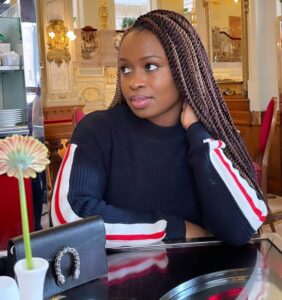 According to her, while she was headed to Southall, the said cabby rather took her to his personal house located at the Sunny Crescent. Meanwhile, going by her tweet, she had immediately reported the matter to both the Police and the taxi company. In their response, the Metropolitan Police told her that someone bringing her to his house doesn’t constitute a criminal offense. 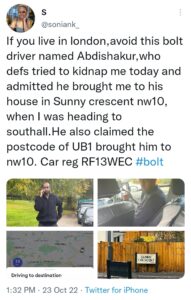 Meanwhile, in response to her complaint to the cab company over the ugly incident, the company tendered apology to her while equally assuring her that the matter will further be investigated and the appropriate actions taken with regards to the company’s regimented internal procedures. There equally promised that she will get a refund for her money within 10-14 business days, as a refund has already been approved by the company.

On the other hand, she seems not to be satisfied by the response from the company, and even went further to question them on when their App will be rid off taxi drivers with questionable characters, as the refund will not solve the problem in any way. 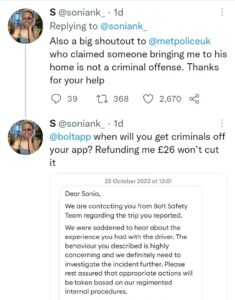 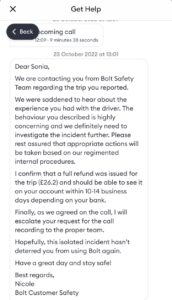 Meanwhile, it seems she has encountered same or similar experience(s) in the past, hence the reason she questioned on when there will stop giving employment to people with questionable characters.

On the other hand, there have been mixed reactions with regards to the entire incident. Some persons are of the opinion that the driver may have not been able to read the map properly, hence the confusion on the eventual destination. Also, some equally alleged that why the metropolitan police didn’t consider it as serious matter may have been because she was not hurt and still alive in the end. Though one of the comments weren’t happy with the attitude of the police towards the incident. 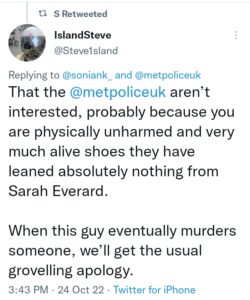 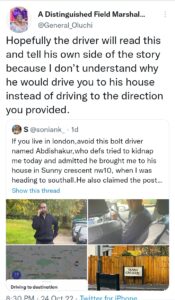