Marriage Saga: Yul Edochie Laments the Increasing Lack of Forgiveness Amongst Many People

Nollywood actor, Yul Edochie is obviously not happy, owing to the fact that the spirit of forgiveness is no longer easily seen in most people. The handsome and talented movie actor is of the opinion that on daily basis people approach God for forgiveness, which they equally get.

But on the other hand, same people still find it so hard to forgive others who have equally wronged them same way they did to God who always forgives their sins, regardless. He further warned that life is too short for anyone to turn their hearts into a storage facility for grudges, equally reminding that no one lives on earth forever. 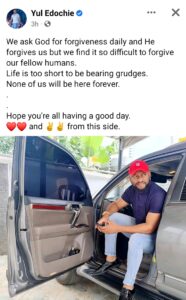 Though it is not quite clear the angle the Anambra State born actor is coming from, but recall that he’s been in the bad books of many Nigerians since he got married to his second wife, actress Judy Austin, which didn’t go down well with his first wife, May Yul Edochie, who already has four children for the actor.

Meanwhile, the post has equally elicited lots of reactions from people, with a majority of them making emphasis on the fact that the actor betrayed his first wife by going behind her to take another wife, in spite the fact that she has been there for him, most especially from the days of his little beginning. 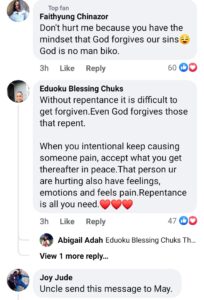 Since the day the actor made it known to the public that he has taken Judy Austin as his second wife and that they already had a son together, it has really been a tug of war between him and Nigerians on social media. Most of them have continued to throw their weights behind May Yul Edochie, while constantly coming hard on Yul Edochie and actress Judy Austin at every given opportunity. Which on the other hand has not gone down well with Yul Edochie.