It is always natural for people to fallout or disagree on certain issues, both at the family level or at the work place. Well, that seems to be the exact case with these senior Nollywood directors, producers and filmmakers, Ezendigbo Tonyiyke and Sunday Nnajiude.

The duo were engaged in a subtle war of words on Facebook few hours ago, following a post made by Ezendigbo on his official Facebook page. In the post, he berated his colleagues who misuse the words “wrap” and “rap”, especially at the end of a particular filming job. According to him, it is wrong to use “rap” to signify the end of a filming job, whereas the right word is “wrap”. 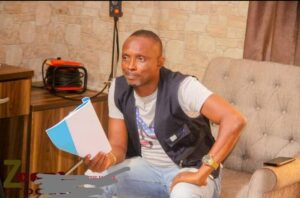 In a swift reaction to the post, veteran Nollywood director and movie producer, Sunday Nnajiude disagreed with the post, stating that the correct word to be used is “lap, which he said means the last scene of the collective sequence in a film. 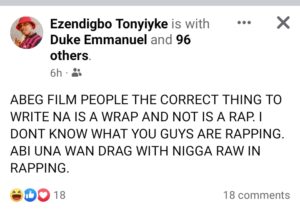 He went on to make further explanations on the subject matter, before adding that his colleague got it all wrong as he failed to carry out a proper research nor did he even try to consult with his senior colleagues in the industry before coming out with that post.

Infuriated by the comment, Ezendigbo faulted his colleague for failing to digest his post before jumping into conclusion, as such, that they are not on the same page as he’s talking a totally different thing from what his post represents. The post has equally generated further mixed reactions from some other persons. 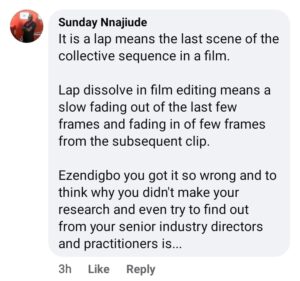 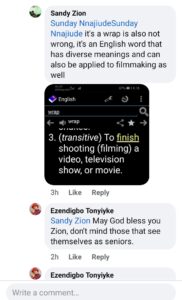 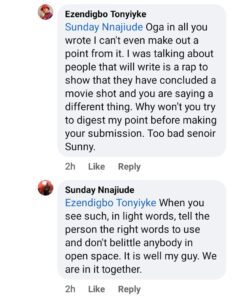 Well, it is not the first time we have seen such bickering amongst colleagues in the entertainment industry in the country, most especially over idea and knowledge superiority tussle. While some were able to sort out their differences soon afterwards and move on, some others have equally been drawn into unending beef.

Nollywood Actor, Caz Chidiebere Reveals That He's a Chiefpriest as He Urge People to Embrace Their Tradition