“Ifeanyi cannot come back Again, But he can give Chioma twins in her next Birth”- Evangelist Gospel Agochukwu Reveals

Mixed reactions have expectedly continued to trail the rumoured death of Chioma and Davido’s son, Ifeanyi Adeleke, who drowned in a swimming pool inside the singer’s Banana Island mansion, few days ago. Meanwhile, just as some others have also continued to send their condolences to the bereaved family, some others have insisted that the three year old boy is still very much alive.

Well, in reaction to the rumours flying across social media platforms with regards to the aforementioned, the Founder of Shekinah Arena Gospel Ministry International, Evangelist Gosple M. Agochukwu has made it clear that Ifeanyi is no more. Though just like others, he failed to make known the source of his information. 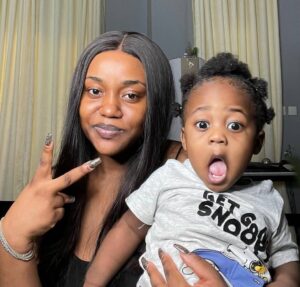 Though he further added few words of solace for Chioma and Davido in his post, and according to him, though their three year old son cannot come back to life again, but he can give his heartbroken mother, Chioma a set of twins.

“God told me Ifeanyi is dead but he can give Chioma twins in her next child birth. Ifeanyi cannot come back to life,” part of his post reads. 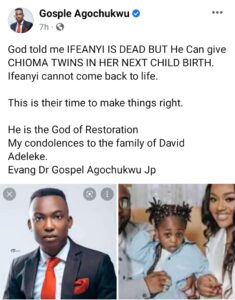 Recall that following the death of master Ifeanyi Adeleke, about 7-9 Davido’s domestic staff of were invited by the Lagos State Police Command for questioning and interrogation, after which some of them were released while the Nanny and Chef were reportedly/allegedly detained further, for more questioning, interrogation and investigation.

Meanwhile, neither Davido nor Chioma has so far released any official statement confirming the death of their son.