Nollywood actor, Uche Maduagwu has once again made yet another controversial comment regards the predicament of Nigerian jailed internet fraudster, Hushpuppi. Meanwhile, this comes after a video of Hushpuppi in a phone conversation with his friend had surfaced online earlier in the day, which expected sparked mixed reactions amongst Nigerians.

In the video shared on the Instagram page of LIB, with a caption that clearly suggests that the newly convict was captured in high spirits as he speaks with a friend on phone, just few hours after he bagged 11 years jail term. 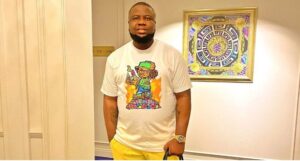 Reacting to the video, the controversial Nollywood actor, Uche Maduagwu is of the opinion that Hushpuppi will eventually become a man of God in the nearest future, possibly after serving out his jail term. Uche further stated that there’s human that God is not capable of giving a second chance in life.

“I see him becoming a Pastor in future and preaching salvation, there’s nobody God no fit give second chance,” he commented. 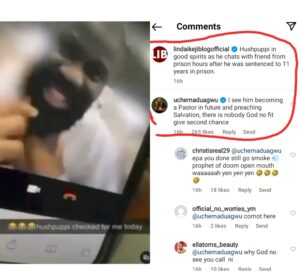 Hushpuppi eventually entered into a plea bargain with the US government sometime in July 2022. After that, the date for his sentencing was fixed, but was afterwards postponed up to two times, before his eventual sentencing on November 7, 2022.