A lot of news, stories and rumours have continued to flying here and there since the unfortunate incident surrounding the death of Davido’s son, Ifeanyi Adeleke, who died after drowning in the swimming pool inside the singer’s Banana Island mansion in Lagos State.

Some of these stories include the fact that the young boy is allegedly alive somewhere, to some of the conspiracy theories affiliated to the death of Ifeanyi, and now, that Davido and Chioma has secretly married traditionally. Wow, such an interesting times for the music star, his fiancee, Chioma and the entire Adeleke clan.

Well, just like many others, I have also continued to cast a serious doubt over the news and rumors flying so high, alleging that Chioma and Davido have actually performed their traditional marriage ceremony amidst the mourning of Ifeanyi’s death. 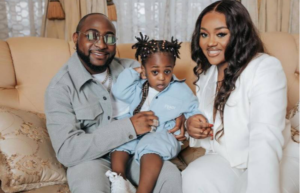 First of all, the news making rounds has it that the said traditional marriage was performed at Davido’s dad house. What sense does this make to your ears? I have not heard or seen, though you may have witnessed it, but I have not seen a situation were the traditional marriage of a woman was done in the man’s house, and Chioma’s case won’t be an exception.

Do you even know that, there are certain things you do not compromise in this life? Yes, because it will come back to haunt you later in life, as people may likely use it against you, and this very issue is one of such. As a woman, how do you even explain to your children or to the world that your own traditional marriage was done outside your parent’s house? Well, that alone is a strong point that has weakened the rumours in its entirety. Secondly, this is not the best of times for the family to be involved in that kind of ceremony/activity. Meanwhile, you may argue this to the length and breadth of this world, but you know the truth, that there’s hardly a time people under this kind of predicament will be in the mood to embark on such a ceremony like the said traditional wedding.

Besides, I’m yet to figure out a convincing reason as to why Davido and Chioma should be so desperate about their traditional wedding that it can’t wait for this phase to elapse. And regardless of whatever reason people come up with to give backings to this argument, it will still make little or no sense in the end. Meanwhile, even if Davido is probably trying to assure Chioma that her place in his life is not negotiable in spite the death of Ifeanyi which is arguably one of their main bonding forces/factors, embarking on their traditional marriage ceremony at a time they are still deep in mourning is obviously not one of such assurances. Therefore, let’s keep our fingers crossed and watch as events unfolds between Chioma and Davido.