by admin
in Business, Entertainment, News
0

Veteran Nollywood actress, Genevieve Nnaji who has been away for several months elicited hearts of fans and many people, especially Nigerians when photos of the multiple award winning actress at an event surfaced online yesterday, Saturday, November 27, 2022. The said photos have continued to trend across social media platforms with many people sharing and posting them on their walls.

Well, here’s yet another good news for fans and followers of the never aging actress as Nigerian media mogul and founder of the Silverbird Group, Ben Murray-Bruce has announced a new filmmaking partnership with Genevieve Nnaji, which is aimed at taking her filmmaking career to the next level.

In a Facebook post shared via his verified account, Ben Murray-Bruce revealed that he’s working on a new deal with the actress to have all her movies produced at the BMB studios and film academy which is located at the Eko Atlantic City, Lagos State. 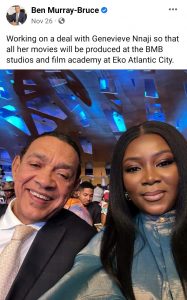 Though details of the deals are still sketchy at the time of this post, but the post has continued to generate lots of mixed reactions, with many people hailing Ben Murray-Bruce for the move to partner with the actress.

Recall that in the beginning of the month of November this year, the African Export-Import Bank (Afreximbank) and Silverbird Group signed a $100 million worth of partnership deal to build one of the best and a world class film studio complex in Lagos, which is today known as the Ben Murray-Bruce Studios and Film Academy (BMB Studios and Film Academy), of which one of the biggest products of Nollywood is already on her way to reaping from this great partnership.

Sad: Lady Narrates How She was Pushed out of a Moving Bus in Enugu by Robbers