Sad: Lady Narrates How She was Pushed out of a Moving Bus in Enugu by Robbers

by admin
in News, Travel
0

It is so sad and heartbreaking the level of desperation amongst the youths of today, especially in their quest to become overnight millionaires and billionaires, if possible. We come across different heartbreaking stories on daily basis, and today, we have brought you yet another of such stories.

The unidentified beautiful lady pictured in this post was reportedly pushed out of a moving vehicle by some yet to be identified robbers in Enugu State. According to the story put out by the victim, she boarded a mini bus from the University of Nigeria Teaching Hospital (UNTH) at Ituku Ozalla which was headed to Garriki, in same Enugu State.

According to her, immediately she entered the bus, her instinct informed her that all is not alright inside that bus and as such, she demanded to be dropped from the bus, but the driver refused and rather, increased the speed of the bus. At this point it dawned on her that she has entered the devil’s corner, and to even make matter worse, the man seated close to the door insisted on closing the door, which she refused. 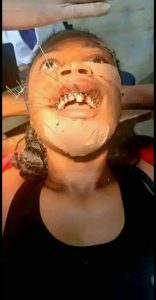 Upon that, a squabble ensured between her and the man, while she was equally screaming for help. Sensing that they are not going to succeed in their evil plans and that her shouting might expose them, they slowed down a bit and she was immediately pushed out of the bus, landing badly on the tarred road. She sustained serious wounds and injuries on different parts of her body.

God a thing, she was immediately rushed to the hospital by some good Samaritans who came to her rescue at that moment. She equally revealed that she has lost some of her teeth as a result of the way she landed on the ground when they mercilessly and heartlessly pushed her out of the bus. 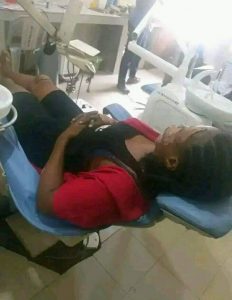 She went ahead to warn people to be cautious of the kind of cabs and mini buses they board, especially at a time like this that Christmas is around the corner, and desperate young men are trying everything within their power to meet up.