The last might not have been heard about the love tales between handsome Nollywood actor, Alexx Ekubo and his erstwhile fiancee, Fancy Acholonu. Recall that at a point the love story of the duo became talk of the town and the wishful prayers of most single ladies in Nigeria, but unfortunately, it was short-lived to the shock and surprise of many people, with no one being able to lay hands on the actual thing that happened, even though a lot of allegations were put forward by members of the public.

Well, the good news this Thursday night of December 29, 2022 is that things might have returned to it’s status quo between Alexx and Fancy. Yes, you heard it right, this is because she has taken to her verified Instagram page this night to tender a heart melting public apology to the actor, especially over the manner in which she handled things during that crisis period in their relationship.

She made it clear that the handsome actor is still the sole owner of her heart, revealing how much she still loves Alexx Ekubo and equally how much she has missed him all these while. Fancy then showed remorse over what she made the actor and his family members go through with their abrupt breakup. She further blamed herself for the way she handled things about them in the past, emphasizing that she could have done better, especially by the way she should have controlled her emotions rather than being over reactive.

Going further, she stated that both the actor, his friends and family members still mean the world to her and that she is not deterred by anything from expressing her mind just the way she feels like.

“Losing you have felt like grief. Love heals,” she concluded, refusing once again to reveal anything about the cause of their breakup 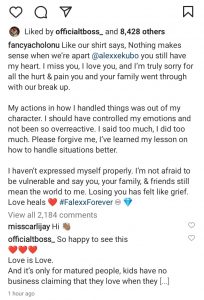 Recall that the lovebirds had earlier in the year announced plans for their marital activities, including their wedding which was supposed to take place late in 2022, but all that fell and shattered like a badly arranged crates of eggs.

Meanwhile, at the time of publishing this post, Alexx Ekubo was yet to react to the post made by Fancy, but the post has continued to trigger mixed reactions from people, with most of them expressing joy and happiness following the reunion of the duo. Well, let’s keep our fingers crossed as we watch how events unfolds in the coming days.