It is the dream of every father to see his child grow and become somebody great in life, be it his male or female child. The joy that often comes with such great moments can never be overemphasized. Meanwhile, that’s the current state of affairs in the life of the former Director General of the Labour Party, LP, 2023 Presidential candidate, Mr. Peter Obi, in the person of Doyin Okupe.

Well, this follows the recent graduation of his daughter, Moradeke Okupe, from Hull University, based in England. According to Mr. Okupe, his daughter just bagged her second degree from the aforementioned alma mater. 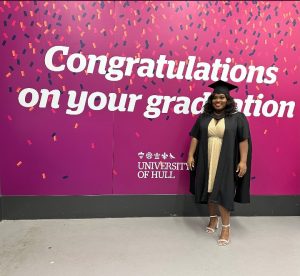 Well, political activities couldn’t permit him to attend the graduation ceremony of his daughter, regardless of the fact that he was in the same England at the time of her graduation. But unfortunately, he was attending the much anticipated Peter Obi’s lecture at the Chatham House, London.

Though he prayed for her and equally apologized to her for failing to honour her graduation ceremony which coincided with Peter Obi’s Chatham House lecture which held on January 16, 2023, but he went ahead to remind her that politics is all about sacrifice and commitment. Recall that Okupe is in the forefront of those pushing for the Presidential ambition of the former Anambra State Governor. 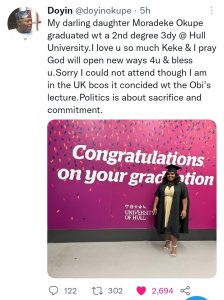 Meanwhile, the post has expectedly triggered mixed reactions from many people on social media. Some blamed Doyin Okupe for sending his daughter abroad to study while the country’s education system is nothing to write home about, and some also urged him to take down the post as it stood against what his principal, Obi’s campaign mantra stands for.

On the other hand, some others were of the opinion that there’s nothing wrong in sending his daughter to any school of his choice, most especially for the fact that Doyin Okupe is a private citizen and is not occupying any public office.

But be that as it may, I do not think Mr. Okupe has done any wrong, after all you can’t dictate to people who have worked so hard to earn their money on how to spend it, he’s not a political office holder at least for the moment, that you would have alleged that he’s using public funds to send his daughter abroad to study. It is very important we know the boundary or limit of some of the criticisms we met out to people just because of their positions in the society, always be rational at such times.