by admin
in Uncategorized
0

Netflix-Nigeria first movie project of 2023 titled “Shanty Town” has continued to trigger unending conversation, criticism and mixed reactions from people and lovers movies. The bone of contention in the movie in question is specifically the nude scenes, then before you talk about some other interesting features of the highly popular Nollywood movie. 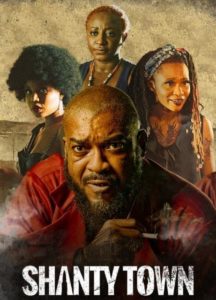 According to her, a lot of persons have kept complaining that the above mentioned subject matters with regards to “Shanty Town” are totally alien to our culture in this part of the world. But she went on to tackle such people to stop disturbing the world with their opinion on the movie, as such, they should look out for movies on Africa Magic (AM) epic that is compatible with their cultural belief and practices.

“Nud*ty is not part of our culture. Shanty Town is about crime, prost*tution, corruption, etc. If it’s culture you’re looking for, go and watch AM Epic and stop disturbing us,” her tweet reads. 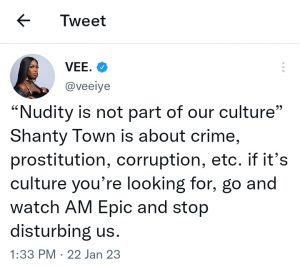 On the other hand, some others have hailed Nollywood for thinking outside the box with regards to “Shanty Town”, and also for taking the bold step to make such a great movie, not deterred by the expected severe criticism from some section of the people, just as already being experienced.

SAD: Lady Kills Infant Son After Giving Him Tramadol To Sleep So She Can Go Clubbing