The last may not have been heard about the controversies that has repeated confronted popular man of God, Apostle Johnson Suleman, especially with regards to his alleged dealings with women. Recall that the revered man of God has been accused of sleeping with a lot of women in the entertainment industry, mostly those in the Nigeria movie industry, otherwise known as Nollwood.

Well, the latest of this unending drama is coming from yet another controversial personality, Charles Oputa, popularly known as Charly Boy or Area Fada. He stated that though he doesn’t like talking bad about men of God, but he’s aware that many Nigerian pastors are fraudulent or just scumbags. 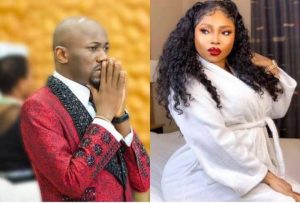 According to same tweet via his verified Twitter account, Charly Boy, he warned Apostle Johnson Suleman to be careful of the kind of life he’s living, alleging that he had a terrible dream about the man of God, were some women attacked Suleman and eventually cut off his manhood.

He further gave the man of God advise, that he should open a brothel since he loves balling with different women. “Since all you know is balling women, why don’t you open a brothel. Another business idea,” he tweeted.

Though he didn’t mention according to the said dream, why the women had to attack the man of God, and equally going on to cut off his manhood. 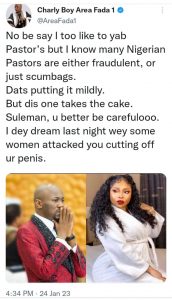 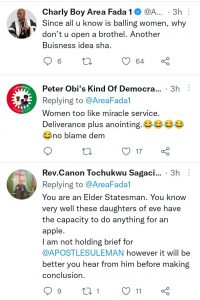 Apostle Johnson Suleman has been accused of sleeping with different Nollywood actresses, including actress Halima Abubakar who has equally accused the man of God of being diabolical, and equally being responsible for her strange ailment, which she has been battling for years now.

Even popular and controversial blogger, Gistlover, some times in 2022, came out with out with a long list of some of the Nollywood actresses who allegedly had affair with the man of God. Though many of the actresses in the list had since come out to deny the allegations made by the aforementioned blogger.