Veteran Nigerian investigative journalist and social media personality, Dr. Kemi Olunloyo has urged the Federal Government of Nigeria to take a decisive action over the activities of most Nigerians on the social media platforms, ahead of the much anticipated 2023 general elections in the country.

Kemi is worried over the fact that a lot of Nigerian youths have become increasingly violent and aggressive across social media platforms, as they continue to promote, project and defend their favourite political candidates ahead of the aforementioned election in the country.

Going further, she cited the case of the recent election in Uganda, which did same prior to their 2021 Presidential election by banning the usage of Facebook, Twitter, Whatsapp, etc. Though that decision in Uganda was met with both national, regional and international condemnation and criticism, and same should definitely be expected if the Nigerian Government chooses to ban social media usage in the country ahead of the 2023 elections. 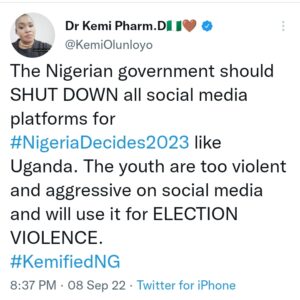 Meanwhile, social media has increasingly become a vital tool in the electoral process in recent years across the world, and like in 2015, it played a significant roles in the defeat of the then incumbent Nigerian President, Goodluck Ebele Jonathan. Though the social media space has truthfully become a bit toxic and violent, but banning it shouldn’t be an option, rather a reasonable regulation would be a better alternative.