Mixed reactions have continued to trail the recent social media post made by popular Nollywood actress, Mercy Johnson Okojie, who shared photos as she attended the APC women Presidential campaign team for the “Southwest” rally.

In the photos shared, she is seen with several other All Progressives Congress (APC) Women alongside the governor of Lagos State, Babajide Sanwo-olu. In the post, the Kogi State born actress talked about the fact that she’s the wife of one of the APC 2023 election candidates, in the person of Prince Odi Okojie, and as such, that she believes in the plan of the party for women in line with the 35% affirmative action for women.

She was specific in her words, as she confined herself to talking only about the plans of the ruling party for the Nigerian women. She refused to talk about the candidacy of any member of the party, not even her hubby, aside revealing that her hubby is running under the party. 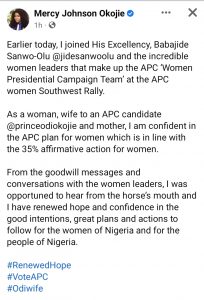 Meanwhile, the reactions from Nigerians have continued to trigger further reactions and controversies. While some are of the opinion that since her husband is contesting under that political party, that it is expected of her to queue behind her hubby, this is against the backlashes from others, with regards to her political party affiliation. On the other hand, some persons refused to understand the fact that there’s no way Mercy Johnson Okojie can actually pitch tent with another political party other than that which her husband is contesting under, as they continue to troll and hit hard on her over the said post. But be that as it may, it is very important that we must tolerate each other’s decisions and choices, with regards to which political party to stand with, especially with regards to the 2023 general elections. Meanwhile, Recall that Prince Odi Okojie is one of those vying for the Federal Legislative positions in his home State in the upcoming 2023 general election in the country.

Photos: D'banj Looking So Happy as He Regains His Freedom After Days in ICPC Detention