by admin
in Entertainment, News, Opinion
0

A certain Nigerian woman, social media personality and business person, who’s simply identified by her Twitter name Olamide has lamented the sort of treatment being meted out to Mavin Records and Jonzing World artist, Rema, whose real name is Divine Ikubor.

In her tweet via her official Twitter account, she wondered why Rema is not getting enough nominations for most of the industry awards, in spite the fact that the music star has done extremely well in recent years, especially in 2022. Going further, she stated that the singer is one of the biggest artists in the world at the moment, which means that he should be getting as many nominations and awards as possible. 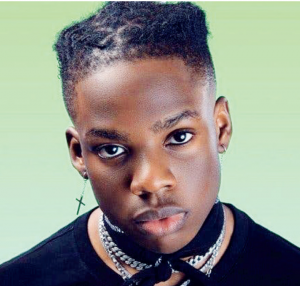 She equally pointed out that Rema had an all round outstanding year (2022) and that Rema’s hit track titled “Calm Down” is currently a global hit, which she believes is enough to push him up the ladder of most of these industry nominations/awards, and equally going ahead to win most of the awards in question.

“Why is Rema’s name being omitted in most of these prominent award and nomination list?” she wondered.

“He’s one of the biggest artists in the world right now,” she continued, “Calm Down is also a global hit. Man had an all round outstanding year. He deserves to be on every list, both nominations and wins,” she concluded. 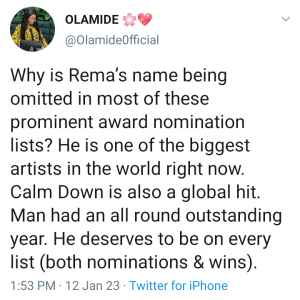 On the other hand, the post has expectedly stirred up a serious conversation in the comment section. While a lot of those who have reacted to the puzzle equally agreed with her, some others disagreed. Some of the later argued that he’s not at the global standard yet, citing the fact that he’s not signed to any of the big foreign Record Labels like a lot of his colleagues in the industry.

Even, some of them criticized the type of songs from the music star, on the ground that most of these songs that win awards are far above Rema’s. Well, in my opinion, I do not subscribe to the school of thought that Rema’s songs are not good enough to attract nominations, that’s absolutely not true.

Besides, he’s not completely left out of these nominations and awards. In September 2022, he was among the Nigerian artists nominated for the Brazilian award show (BreakTudo Awards), in which he got two nominations in two different categories (him and Burna Boy were nominated in the category of International collaboration and he was also in the category of International Artist of the Year).

Also, his song “44” was nominated for the Best Urban Song by the Odeon Awards 2022, amongst others. So, let’s take it easy on the young and talented Rema. And for sure, better days are ahead.