These photos have continued to trend across social media platforms in recent times, and also has remained a major source of controversial and mixed reactions from people. The bone of contention here is the way one of the bridesmaids is starring at the groom during a wedding ceremony, such that glaringly depicts the fact that something sinister/fishy is clandestinely walking through her mind, allegedly.

While some people have continued to defend her, some others have on the other hand made it clear that should anything eventually go wrong in the said marriage, that she (the bridesmaids) should be held accountable (lol). Well, in as much as the look on her face is glaringly suspicious, the truth remains that no one can actually say in the exact term, what is going on here or what prompted such look from her. 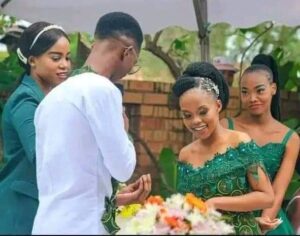 On the other hand, what if the groom is her blood brother or that they are closely related in one way or the other, and she’s only genuinely happy for her blood relationship on his special day? Yes, she might be as innocent and peaceful as a dove, but only being a victim of circumstance and mischievous mindsets.

The truth remains that our society has been regrettably configured in such a terrible way that negativities are quickly read into most situation, before any other genuine consideration. People are now quick to manufacture different narratives just to suit their intentions, whereas ends up projecting innocent people in the bad lights. In as much as I’m not defending her, it will equally be unfair and heartless to pass such harsh criticism and judgment on her based on a mere assumptions.

But be that as it may, justice demands that, until we hear from her own side of the story, before any verdict what so ever can be passed on in this case. And until that has not been carried out by anyone, then we must continue sheathing our swords of reprimand. Equally, it has become more of unsurmountable tradition to hastily subject people to harsh and demonizing media trials, worse still, without facts, merely based on hearsay and deceptive assumptions.