Photos: D’banj Looking So Happy as He Regains His Freedom After Days in ICPC Detention

Popular Nigerian music star, businessman and entrepreneur, Oladapo Oyebanjo, better known on the stage as D’banj has reportedly been released from the custody of the Independent Corrupt Practices and Other Related Offences Commission, ICPC.

This follows the arrest of the singer about three days ago by the country’s anti graft agency on the ground that he misappropriated close to a billion Naira, precisely 900 million Naira, which was part of the funds mapped out by the Federal Government for the N-Power scheme, being one of the social intervention/empowerment programmes of the current APC regime. 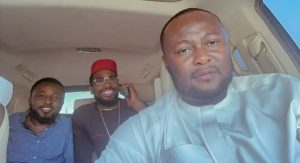 The news of his release was made known by his lawyer, Pelumi Olajengbesi, who took to his social media platform to share photos of himself and D’banj inside a car following the singer’s release. In the photos shared, D’banj looked so happy, smiling and doesn’t in anyway appear troubled. 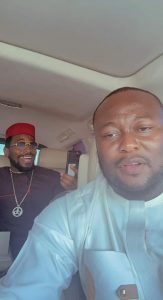 Meanwhile, according to Vanguard Newspaper, the “Oliver Twist” crooner was released on self recognition, and on the ground that he may be invited for further interrogation in the course of the investigation. In the statement released by his lawyer immediately after his release, he frowned at the fact that his client was humiliated for no just course, claiming that the singer is completely innocent of the allegations brought against his client.

While thanking Chief Mike Ozekhome (SAN) and Barr. Babs Akinwumi, probably for their roles in the release of his client, he equally challenged the government to come fort with names of government officials that D’banj connived with to siphon the said amount of money. Well, be that as it may, we await further details and information with regards to this very matter.