Revealed: Here’s the Bitter Truth About The 53rd Marriage Anniversary of Chief Pete Edochie and Wife

It was such an enviable and admirable milestone that was cherished by many people as witnessed across the online space, most especially in the face of incessant marital crisis and divorce stories which has become a well known trademark amongst most marriages of today. 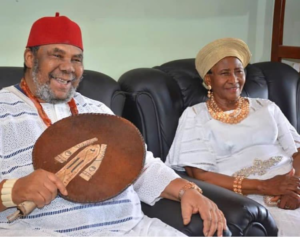 The anniversary celebration saw the gathering of notable personalities from all walks of life, including the incumbent Governor of Enugu state, Hon. Lawrence Ifeanyi Ugwuanyi, who was personally present. Well, as usual or expected, “the association of social media tappers of blessings” were not left out of the picture, as comment sections of many posts about the anniversary were littered with the usual “I tap into this/their blessing” slogan or national anthem.

Funny enough, most of these persons are only after the glitz and glamour of the marriage and celebration, and evidently very far from the main substance of the marriage anniversary. Yes, because how many of these persons sat down to reflect on what has actually sustained this golden marriage for decades? And how many of them are sincerely willing to go through what they went through with regards to their marital adventure? 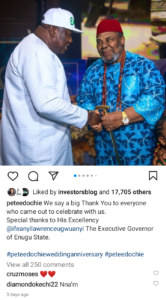 The truth remains that successful marriages are not anchored on a mere wishful desires or malaria inspired midday dreams, my brother, it is very far from that. Should it be that the celebrants took out time to lecture the public on the challenges they managed to overcome all these years as married couple, I’m very sure that a lot of us would have been shocked to the bones. But that’s the part most people don’t know or would not want to hear, because to them it is all about the “glitz and the glamour”.

Unfortunately, that’s how most people have been configured to see marriage through that deceptive lenses. Celebrities and others flood the social media space with beautiful photos, videos and write-ups about their supposedly beautiful and perfect marriages. In the end, most of these persons come to believe that marriage is nothing but a paradise on earth, a union filled with all the beautiful things of the world that the mind can ever imagine- what an irony! 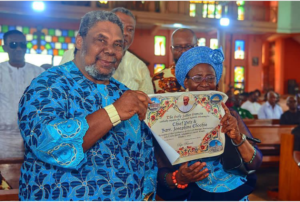 As such, when they finally come face to face with the true realities of marriage, they are already too weak and unprepared to either cope or deal with the situation just like Chief Pete Edochie and his lovely wife had to, for over five decades, hence the main reason we are able to celebrate them today. As such, that their marriage has become an instant obsession to tappers of every blessing and fanciful things of the world.

My dear, no marriage is bed of roses, not even that of Pete Edochie and his wife. Yes, there’s no gainsaying in that fact, because they too like other successful and enviable marriages went through varying challenges and turbulent times, but because they were able to win and emerge victorious, hence the reason you had the opportunity to admire and envy their marriage story in the end. 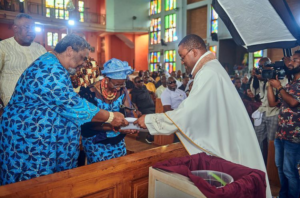 So, as you are busy admiring their marriage and praying to have a replica of it as well, equally be prepared to walk their path in the steps they did. Do not be deceived by the hypnotizing funfair, glitz and glamour that has enveloped the entire story, because the story is not a one way traffic. It must always come with antagonizing experences.

And once again, we join the rest of the world in celebrating with the Edochies on their 53rd marriage anniversary as they head towards their diamond jubilee.