by admin
in News, Opinion
0

Meanwhile, there have been a lot of talking points from the encounter, but the most prominent among them is the trademark breathtaking goal from Valverde, the “never say never” winning mentality of Real Madrid and Carlo Anceloti’s tactical substitution ingenuity. 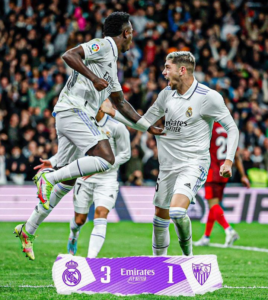 Real Madrid and Uruguay midfielder Fede Valverde has continued to show why he’s one of the best footballers around Europe at the moment, as he’s constantly gifting football fans/ lovers wonderful strikes, and consistently as well, such that is seemingly becoming an “on the pitch” trademark or signature of the soft looking but rugged midfielder.

He did it once again last night.

He has been a master of the craft in recent times, coming up the stage in each occasion with something special for fans to go home with at the end of the game. Meanwhile, one of the most amazing thing about his spectacular goals is the effortless manner with which he does it. In fact, his goal against Sevilla would probably linger in the heart of Sevilla’s goalkeeper, Bono, for a long time to come. Yes, he would have probably wondered how Valverde managed to achieve that in spite being in a bit of an unfavourable position, but just like the saying goes, “e dey blood (it is in the blood/gene)”. 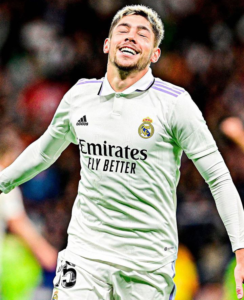 Real Madrid as a team on the other hand, has continued to show why there are one of the biggest name in the world/game of football. And one of the most amazing thing about this team is the fact that even in the closing seconds of their games, be it the very last kick, you can never say you have actually wrestled them down to defeat. Yes, there have overtime and on too many occasions proven to be the cat with nine lives.

Sevilla proved to be a really hard nut to crack throughout the entirety of the game at the Bernabeu, and even pushed the game to Real Madrid immediately there got the equalizer in the 54th minutes through Erik Lamela, such that Real Madrid fought so hard to stay in the game. But two late goals from the host sent all that muscle of resistance into the drainage, which once again makes Real Madrid a deserved beneficiary of the title “the cat with nine lives”.

At a point when most people would have concluded that Real Madrid were set to drop yet another point in the race for this season’s league title, with just about ten minutes to go, there eventually turned the table around. And for those who followed their Champions League journey last season, you will understand that Real Madrid has actually built a reputation that states clearly that “you haven’t defeated Real Madrid until you hear the final whistle from the center referee”. Chelsea, PSG and Pep Guardiola’s Manchester City could all testify to that. 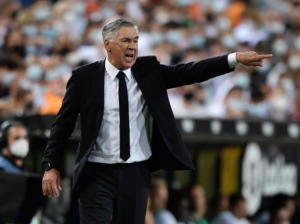